As scientists tell us, the exact place where the olive tree sprung for the first time is the greater Mediterranean Basin. The first cultivation of the olive tree worldwide took place in Greece, and more specific in Crete.

This happened about 3500 BC in the Early Minoan times. In this period the olive tree was in a wilder form in comparison to the tree we know today. After 2000 BC the cultivation of the olive tree in Crete was very intense and systematic playing the most important role on the island’s economy. From Crete started the first export of the olive oil not only in mainland Greece but in Northern Africa and Asia Minor as well. 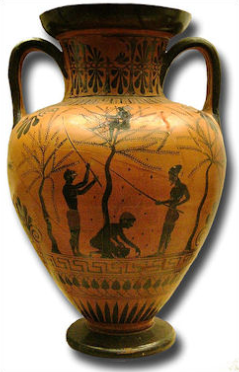 Between the 7th and 3rd centuries BC ancient philosophers, physicians and historians undertook its botanical classifications and referred to the curative properties of olive oil. This knowledge is being “rediscovered” today as modern scientists research and find news why the Mediterranean diet is so healthy.

When Romans occupied Greece, the olive oil production continued and Romans were able to learn the secrets of cultivation. The production of the olive oil in Greek territories was significant because of the vast size of the Empire. The Empire itself included almost half of the olive oil productive areas in the known world and the product was exported throughout the world.
The love and high esteem of the Greek olive-grower for the olive tree is passed on from generation to generation and from family to family. With the birth of a child an olive tree is planted which will grow and develop along with the child. When the child starts school at the age of six, the olive tree is ready to produce its fruit. The blessed tree grows up with the family, only it will have a much longer life and will still be around to be tended by the next generation, and the one after that. Each year, it yields its annual crop of olives in return for the labor and love expended on it.

Fitia Foods Inc. is a Corporation with Headquarter Offices in New York. Its main business is food products such as olive oil, honey, coffee and other health related Products.
But the main product is Extra Virgin Olive Oil.
Read more